Search selected archival collections from the American Jewish Historical Society (one of the Center’s partner organizations) for names, places, or keywords relevant to your family history project. For a list of the databases that you can select for your search, please scroll down. 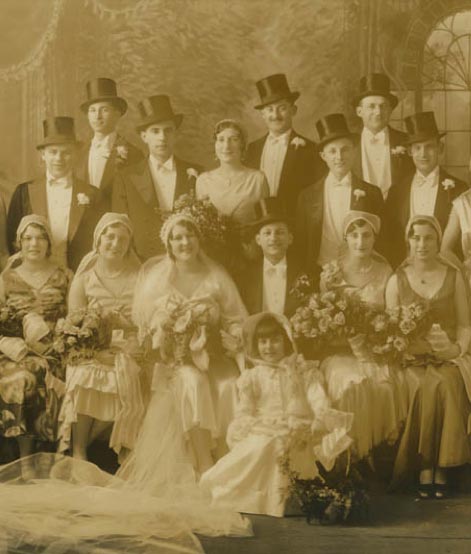 11 linear ft. ID: I-9
During World War I, the American Jewish Committee, one of the major Jewish communal organizations, attempted to document Jewish participation in the armed services by sending out questionnaires to soldiers believed to be Jewish. The collection includes the completed questionnaires and correspondence regarding the project.

ID: I-80
The Baron de Hirsch Fund Records (collection #I-80) document the organization's involvement in the planning of Jewish agricultural communities, and agricultural and trade schools across the United States; the establishment of the Jewish Agricultural Society; and the business records of the Fund itself. This particular genealogy database records students who attended classes 7 through 66 at the Baron de Hirsch Trade School from 1897-1928. The information is taken directly from Pupil Record Books used for admission purposes to the school.

7.60 linear ft. Ref. # I-230
Established in 1878, the Brooklyn Hebrew Orphan Asylum changed its name to the Jewish Youth Services of Brooklyn in 1954. The agency merged with the Jewish Child Care Association in 1960. Records encompass histories of the asylum, constitution and by-laws, certificates of incorporation, Board of Trustee meeting minutes, information on the cornerstone laying, correspondence, annual reports, plaques and awards, publications, scrapbooks, and admission and discharge ledgers (1879-1953). Information concerning the Women's Auxiliary and Alumni Society also forms part of the collection.

Ref. # I-96
Consists of individual case files of refugees assisted by HIAS primarily in immigration and naturalization services. Included in many files are biographical data, correspondence between HIAS and American and foreign governmental agencies, and miscellaneous supporting documents. These files are arranged alphabetically in two groups. The first group contains cases from 1930 to 1965; the second group covers primarily the 1960's to 1977. The collection also contains individual arrival records, arranged alphabetically, from 1882 to 1929.

Ref. # I-363
The HIAS database consists of selected data fields from the HIAS master card index of families and individuals resettled in the United States, approximately 1955 to 2000, including name, country of origin and date of registration with HIAS or date of arrival in the US. For images of cards with additional data, go to the HIAS archives search page, which also provides a link to the HIAS website for how to access additional information on individual clients.

73.5 linear ft. and 1 map folder Ref. # I-42
The collection contains correspondence, meeting minutes, student ledgers, admission and discharge records, and applications for admission to the Hebrew Orphan Asylum of the City of New York, as well as souvenir journals of the Seligman Solomon Society. This database indexes names recorded in a ledger titled "Index of Children, 1860-1900." The ledger is located in Box 73. The page numbers shown in the database table are listed in the ledger, however; they may or may not correspond to other ledgers located in the collection.

This collection contains a listing of 930 marriages performed from 1850-1900 by the Rev. Dr. Henry Hochheimer, rabbi of the Baltimore Hebrew Congregation (Stadt Schul), 1849-59, and Oheb Israel Synagogue (Eden Street Congregation), 1859-92, emeritus, 1893-98. In it are listed 901 marriages performed in Baltimore and others in Maryland, Virginia, Pennsylvania, North Carolina, Delaware, and Washington, D.C.

72.3 linear ft. and 1 oversized folder ID: I-91
The Industrial Removal Office was created as part of the Jewish Agricultural Society to assimilate immigrants into American Society, both economically and culturally. It worked to employ all Jewish immigrants. The collection contains administrative and financial records, immigrants' removal records, and correspondence.

6.25 linear ft. ID: I-90
The Jewish Immigrant Information Bureau (JIIB), organized primarily by the Industrial Removal Office, operated at the Port of Galveston, Texas from 1907 to 1914. The bulk of the material of the Galveston Immigration Plan records is correspondence between members of the Bureau, national Jewish organizations, and international Jewish organizations. This collection has been digitized in full. Please see the finding aid for links to the digitized images.

0.75 linear foot. ID: P-808
The Michaelson family papers include early family correspondence, documents, and ephemera; genealogical research conducted by Ms. Appleby, Anna's granddaughter; copies of New York City marriage certificates kept by Louis B. Michaelson, Rabbi, between 1906-1907; and Anna Michaelson's copies of original birth records that she kept as midwife in the Lower East Side in New York City between 1892-1916. The collection is valuable for researchers interested in the Lower East Side between 1890-1920, Russian immigration to the United States, acculturation of immigrant families to America, midwives, the Jewish communities in Portsmouth, New Hampshire and Trenton, New Jersey, the Boys Institute in the Lower East Side, and the National Committee for Relief of Sufferers by Russian Massacres. In addition, this collection is rich in genealogy material, for researchers interested in the Michaelson family, births in the Lower East Side between 1892-1916, and marriages in New York City between 1907-1909. The collection contains correspondence, a family tree, birth certificates, memo pads, marriage certificates, meeting minutes, photographs, and a prescription pad.

The collection is predominantly in English, with some Hebrew, Russian, and Yiddish.

1535.8 linear ft. ID: I-337
The collection documents the National Jewish Welfare Board's (JWB) evolution from an organization founded in 1917 to provide support for soldiers in times of war to an agency involved in all aspects of Jewish life both in the United States and abroad. In 1990 JWB recreated itself as the Jewish Community Centers Association of North America.

Collection I-152, Naturalization Certificates, consists of an alphabetical set of Declarations of Intention or Affidavits of Intention filed with the Court of Common Pleas for the City and County of New York or with the New York Superior Court from 1829-1845 and Reports of Aliens made to the Clerk of the Court from 1816-1828. The only genealogically relevant information contained in the later Declarations and Affidavits is the identification of the particular "foreign Prince, Potentate, State or Sovereignty" to which further allegiance is renounced, for example, the "Grand Duke of Hesse Cappell: or the Authorities of the Free City of Frankfurt." This reference will identify the prior citizenship and, by implication, the place of birth or prior residence of such person. The majority of the declarants came from various Germanic states, other central European countries such as Switzerland or Roumiana, or from England. The very small number of earlier Reports of Aliens from the period 1816-1828 specifically list name, sex, place of birth, age, nation and allegiance, place from whence migrated, occupation and place of actual or intended settlement.

Collection I-153, Insolvent Debtors Cases, consists of documents filed with Supreme Court of the State of New York for the City and County of New York in insolvency cases. The bulk of the documents consist of Insolvent Assignments each of which, like a modern bankruptcy, involves a discharge of the debtor's debts and an assignment of his assets to be sold or managed for the benefit of his creditors. The documents sometimes contain a reference to a legal notice published in a newspaper or schedule of creditors. A small number contain an inventory of the debtor's assets.

The collections are in English.

46 reels of microfilm. ID: I-154
This collection consists of legal filings made by approximately 10,000 Jewish-related not-for-profit organizations incorporated in New York County. The organizations include fraternal societies, political clubs, professional associations, synagogues, landsmanschaften, benevolent organizations, social clubs, burial societies, charities, and neighborhood facilities. The filings are very similar to modern corporate filings and include original certificates of incorporation, consolidation or change of corporate name. Each certificate of incorporation includes the name of the organization, the purposes or objects for which it was formed, the principal office or territory of principal operation (for example, the "Borough of Manhattan"), the names and addresses of the initial directors or trustees or officers, and the names of the incoporators.

This collection is in English.

ID: P-12
The Mordecai Sheftall Papers WPA Index of Names - American Revolution contains names found within the American Revolution-era papers of Mordecai Sheftall. This family history database transcribes Part II of the Works Progress Administration Guide (pages 150-259), Analytical Indexes to the Sheftall Papers and may be viewed here. The index contains very helpful lists of personal names appearing within the indexed portion of the collection. The Persons Index lists persons mentioned in the Sheftall Papers as well as codes linking them to bibliographic sources of American Revolution soldier and participant rolls. According to the introduction to this section, "This alphabetical list contains all of the names, with their variants, found in the Sheftall papers; those in capital letters will be found in the transcriptions and abstracts in Part I of this book." Please note that this database only lists those selected provision returns transcribed in the WPA guide. You may find additional documents by on access.cjh.org.

ID: I-93
This series contains correspondence between the United Service for New Americans and representatives of welfare agencies, NCJW sections, and refugee committees in cities and towns across the United States regarding the arrival of immigrants settling in these various communities. USNA sent each community a summary of individuals settled in that community under the established quota during the previous month. In order to confirm each immigrant's arrival, USNA sent forms for community representatives to fill out and return, including the date individuals arrived in the community and indicating whether they had remained, did not arrive, or arrived but left. These forms include the name of the community and settlement agency responsible, USNA case number for each individual or family arriving, along with their names, ages, and port of entry with date of arrival. Additional correspondence between USNA and the community settlement agencies concerns the per capita allowance paid by USNA to cover the first two weeks maintenance.